For all the latest news from Orchard House, click here.

Your pet’s health and happiness is our number one priority. We promise to ‘care for your pets as if they were our pets’.

At Orchard House we understand that you want to give your pets the best treatment. Our Well Pet Club makes routine healthcare simple and more affordable. A monthly Direct Debit covers:
annual vaccinations, 12 months of parasite control, two six-monthly health examinations with a vet, plus discounts on may other products and services.

For more information, view our leaflet, please call us or pop into the surgery.

Have you heard of the yellow dog project?

The Yellow Dog Project was created to bring awareness to dogs who need space while training, recovering from surgery, or being rehabilitated.

There are many reasons why a dog may need space.  It may…

In short, a yellow marker on a dog means it needs some space.

We welcomed 11, yes 11, German Shepherd puppies today for their first vaccinations. Staff were queuing up for a cuddle so much so we had to check their pockets when it was time for them to go home. 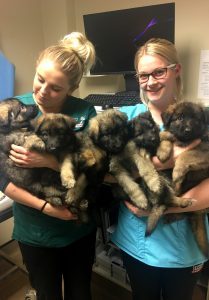 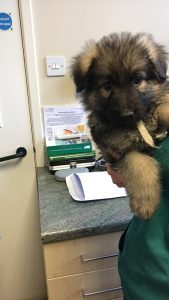 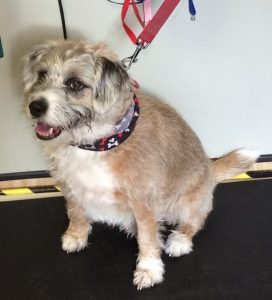 Do you give your pet your own food as a treat? If so, you are not alone. A PDSA Paw Report last year found that 26% of dogs are fed scraps and dinner left overs.

Obesity can cause your pet significant health issues, not only does the extra weight impact on their quality of life, it may shorten their life and increase the risk of other health issues. If a pet is overweight when they are young, chances are they will be overweight as an adult too.

But don’t worry, our nurses are here to help. Their free weight clinics are an opportunity to review your pets current diet, treats intake and levels of exercise. By using this holistic approach we will look at the best way for you to help reduce your pets weight. This may be as simple as decreasing food intake and increasing exercise. Alternatively, there are weight reduction diets that can be bought, which will see a quicker weight loss. Your pets bespoke plan will include body measurements and weight checks that will be monitored to review progress and together we can celebrate their success.

Bailey was a rescue dog, lucky enough to fall on his paws and find Lyndsey to love and care for him. Lyndsey now admits that she was making up for lost time and love, and Bailey was spoilt and fed a few too many extra treats, and as a result carried an extra few pounds!

Lyndsey is delighted with his progress and feels he is grown massively in confidence, visits to the vets are no longer feared, but enjoyed. He enjoys getting the attention of all the Orchard House team.

For more information give one of our nurses a call today or book online www.orchardhousevets.com/book-appointment 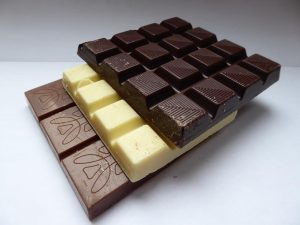 Chocolate poisoning in dogs continues to be amongst the most common toxicities we see each year. With it being Valentine’s Day, it must be remembered that chocolate-based treats and gifts can be toxic to our pets.

Chocolate is made from cocoa beans, the dried and partially fermented seeds of Theobroma cacao native to the deep tropical region of Central America. The toxic constituent, theobromine, is a related to caffeine.  Chocolate also contains a small amount of caffeine.

The amount of theobromine in chocolate products varies considerably due to natural differences in cocoa beans as well as the ingredients of products. There may also be some genetic susceptibility to theobromine toxicity in certain breeds. White chocolate is very low in theobromine and therefore considered non-toxic.

In dogs, the most common clinical signs include vomiting, abdominal discomfort, diarrhoea, weeing a lot and bloating. Theobromine intoxication will also stimulate the myocardium and CNS stimulation – resulting in tremors, high heart  rate and a fever. There is also the risk of pancreatitis following ingestion of chocolate products that contain a large amount of sugar and fat.

Treatment is largely supportive with particular emphasis on the management of cardiovascular and neurological effects, as well as rehydration. The prognosis is generally good and most dogs make a full recovery within 48-72 hours.  There have been very few fatal cases reported (about 5 in 1000).

Chocolate is also toxic to cats, rodents and rabbits, but there are limited case reports, therefore a toxic dose is yet to be established. Cats seem less inclined to eat chocolate, although, nationally, there are a few cases each year where significant clinical effects are seen.

If your dog (or other pet) has eaten more than a small amount of dark or continental chocolate, call us for advice as soon as possible.

On Valentine’s Day, you may be lucky enough to receive a bouquet of flowers from a loved one. Some of these flowers can be hazardous to pets.

A flower of particular concern is the Lily. Lillium species can cause kidney failure in cats.  All parts of the plant are toxic, including the pollen. Ingestion of less than one leaf may cause severe poisoning. In one case, a cat developed severe clinical signs after playing in a box in which the owner had received a delivery of lilies. This cat was reportedly only exposed to the residual pollen inside the box. Treatment is essential in all cases, with focus on the prevention of kidney failure and the skin should be washed thoroughly to remove any residual pollen on the coat.  Kidney failure following lily exposure has not been observed in other animals, however, ingestion of plant material may cause some upset stomach problems.

Other flowers that may be found in bouquets are stated below:

Hydrangea commonly causes vomiting, as well as, abdominal discomfort, diarrhoea, lethargy and depression. Dermatitis has been reported in humans who regularly handle the plants, but it has not been reported in animal exposed.

Ending on a positive note, Happy Valentine’s Day to all our loved pets – just stay off the chocolates and flowers and stick to pet treats…

Thank you to all who voted for us in the Petplan veterinary awards!
It is always nice to have recognition for the care we provide.

Orchard House has been a finalist 3 times previously, but we’ve always been runners-up. Hopefully this is our year!
No more “always the bridesmaid, never the bride”…. 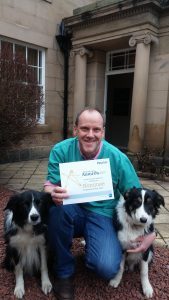 The Government Chief Vet has declared a Prevention Zone introducing enhanced biosecurity requirements for poultry and captive birds, helping protect them from a strain of avian flu circulating in mainland Europe. The zone covers England and will remain in place for 30 days.Please refer to the government website.

We are currently experiencing a fault with our Hexham phone number, making it unavailable. We have reported it and an engineer is working to resolve the fault.

Sorry for any inconvenience.