A story of the cat who found his way home

You are here: Home / News / A story of the cat who found his way home

In 2012 a couple from Hexham decided to move to Allenheads, Northumberland. They had a lovely cat called Harry who enjoyed a stroll outside every now and then. After one year in Allenheads the couple decided to uproot and move to South Yorkshire. Unfortunately when packing boxes, Harry slipped out of the house. After a couple of days Harry did not return home and with the moving date nearing Harry’s owners decided to stay locally and continue the search for him. After a month, the couple had to heartbreakingly move but would continue the search when they could and constantly kept in touch with neighbours. Harry unfortunately never showed up at Allenheads again.

Fast forward to 2017 and one cold day in February we received a phone call about a cat who had been hanging around a house in the centre of Hexham for a few weeks. The homeowner had been leaving a dish of cat food and some water outside every morning thinking that the cat was local and possibly just after some food. They had asked around if this cat belonged to anyone in the area but they were not having much luck. Then one neighbour said the cat looked an awful lot like a cat that used to live around here but that was nearly 5 years ago, so unlikely.

At this point the homeowner called us and asked if we could check for a microchip. They popped along to borrow a cat carrier and later returned with the cat. We scanned this cat and found a microchip. To our surprise the microchip number pinged with Identibase who confirmed this cat has been marked as missing since 2013!!

We called the registered number from the microchip which had sensibly been updated by the cat owners and after explaining that Harry had found his way back to his first home here in Hexham, we have him safely in our practice where he is enjoying the freedom of the consulting room and is playing with a cat toy with our staff. The owners were completely overwhelmed and later that day they travelled the 4 hours back to Hexham to collect, who we now know as ‘Harry’.

We love this story and often refer back to it (in shorter form!) when recommending microchips to cat owners. Without a microchip there is very little chance that Harry would have made his way back to his owners. We recently heard that he is healthy, happy and stays much closer to home!

Microchips cost £19.99 with Orchard House Vets and the story of Harry serves as a reminder of the importance of Microchips! 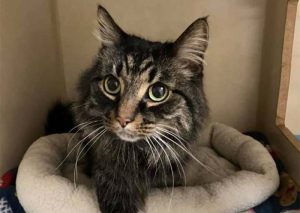 Houseplants that are safe for cats and dogs